History of the Farola de Málaga 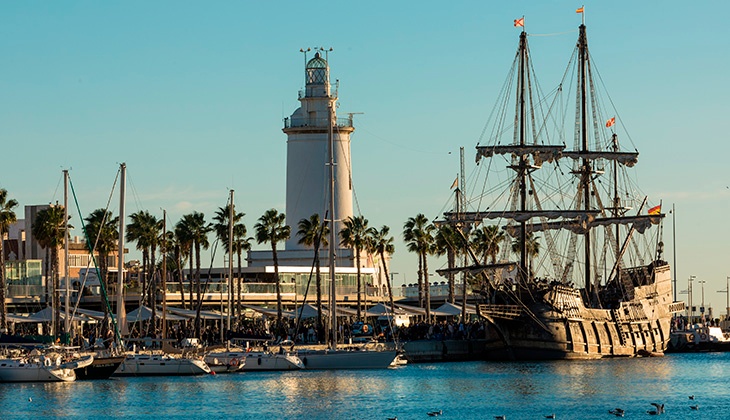 Located at Málaga harbour, the Farola de Málaga is one of the Costa del Sol’s icons. Built in 1817 with stones from Gibralfaro hill, it is the only female named lighthouse in the peninsula. A real symbol that has survived earthquakes, wars, wrecks, and has lighted up the doors of Málaga to sailors, fishers and traders. Do you bring yourself to come into its history and secrets?

Taking the same space that la Farola, there was situated a wooden lantern working as a lighthouse until 1817, when, Joaquín María Pery designing, the Farola de Málaga works concluded. Some years later an important fact for the future of the lighthouse happened, the earthquake of 1884. This disaster left unable part of it, what provoked the first remodelling in 1885. The structure would be refurbished between 1909 and 1913, standing out the stretch of the keeper’s dwelling. But the Civil War was to come! And in 1936 the light of the Farola faded by order of the Republican Army, since it was the reference for the enemy. In addition, it was painted in earth tones to be camouflaged, but this didn’t make it free to suffer serious damages during the war conflict.

Which is the purpose of a lighthouse?

Did you know that lighthouses are elements that have helped sailing from time immemorial? Its function is to emit a light signal for ships to be able to find the harbour at night. But every lighthouse is a unique one, all of them have an own glow with an  special rhythm, a fingerprint collected in The Lighthouses’ Book to know what one is sighted from the vastness of the sea. Nowadays everything is mechanized, but years ago people worked tirelessly! They were working 24 hours a day, so keepers took turns to perform their task as when electricity didn’t exist, to turn the knob in order to charge the lighthouse was needed.

In 1993 the last keeper living in the Farola de Málaga left. Nowadays this role has become unnecessary for everything is mechanized and new technologies like the GPS have appeared, giving the exact location to ships.