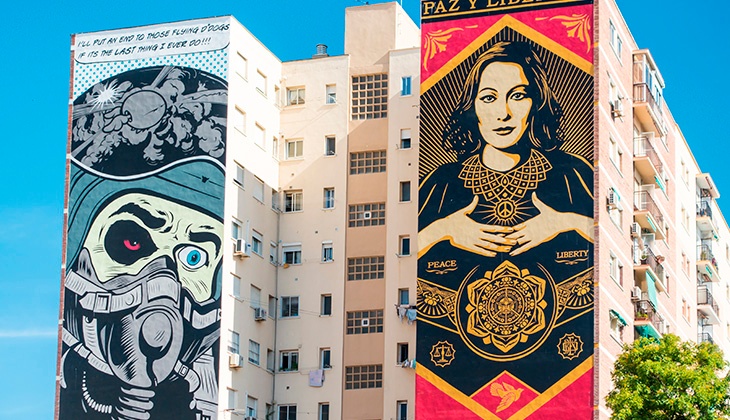 Málaga region is a cultural orchard! The perfect place for all culture lovers where the best museums in the world, a first level gastronomy, hundreds of cultural assets, flamenco and Pablo Ruiz Picasso's legacy live together. All this wrapped in an amazing history. Discover it!

Most of the great museums are located at the capital, Málaga. Contemporary art is represented at CAC Málaga, Pompidou and Museo Picasso. For its part, Museo Carmen Thyssen hosts an extraordinary costumbrist collection. If you want to watch local artists’ samples, then you must visit Museo de Málaga, where you will find an impressive art collection, mainly composed by works of artists from Málaga.

Costa del Sol gastronomy is rich in variety and tastes, thanks to the large number of cultures who were settled here along the history. The proximity to sea and mountains produces a different cuisine, where marine receipts live together with other more typical of the inner region, such as stews. Pescaíto frito, porra, ensalada malagueña, ajoblanco, migas or berzas are some of the most typical dishes of Málaga. But there are many other receipts to delight your palate! And up to 9 Michelin stars!

This region has been inhabited since ancient times. A proof of this is  Antequera Dolmens archaeological site or several cave paintings, founded at the area. Phoenicians, Greeks, Carthaginians, Romans, Byzantines and Arabians have gone through the region. Arabians also stayed here for eight centuries, coating this area with their culture, and combining it with that from other villages which were here before, building a mosaic which draws the current Málaga culture.

Málaga region has always been a land of poets. From Manuel Altolaguirre and Emilio Prados, including Vicente Aleixandre, Lorca or Manuel Alcántara. You can feel the l power of literature through Pozos Dulces, a Málaga quartier, where streets are decorated with sentences from many poets. An inspiring "words wall" was built in the Plaza del Pericón, considered one of the most beautiful squares in the city. Just words which seems to have no meaning but that can make you feel thrilled!

Málaga has played a very important role in the life of Pablo Ruiz Picasso, one of the humanity's history greatest artist. There are many corners at the city where the artist is present nowadays. We recommend you its birthplace, in the Plaza de la Merced, where the artist played to be a bullfighter when he was a child. This is currently a museum dedicated to his life and work.

Although it is attributed to the gipsy people arrived to the peninsula in the 15th century, the flamenco is a mixture of cultures! You can find nowadays tablaos, taverns and clubs along Costa del Sol to dive into the flamenco culture. Temples where this art is worshipped, places of obliged visit to get seduced by the power of singers, musicians and dancers.

If there is a cosmopolitan district with modern culture essence, this is Soho Málaga. It is one of the city main attractions due to its original architecture, its cultural areas and the art involving its streets. You will find many graffiti on its walls, from internationally known artists such as Obey. There is also located the Centro de Arte Contemporáneo de Málaga (CAC), which hosts exhibitions along the year.