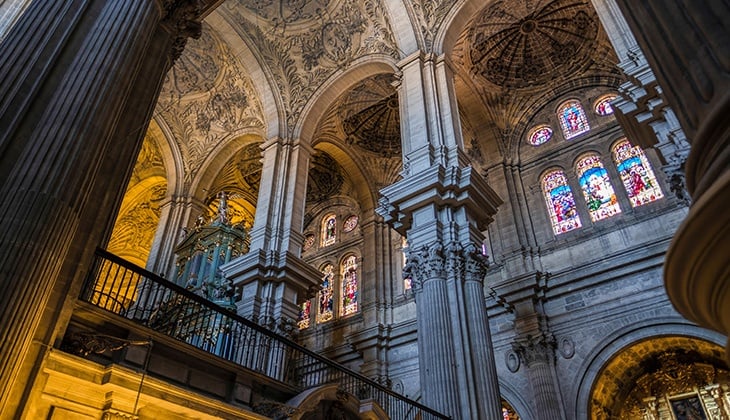 Hermitages, shrines, churches… Do you know that Málaga region’s religious heritage is one of the most important in Andalusia? In addition to the religious value of these temples many of them have a historic or architectural one. Today we recommend you some of the most symbolic in the region. Go on reading and know all of them!

In Alpandeire (Serranía de Ronda) we find a church founded in 1505, whose baroque style makes it stand out over the very town and surroundings. So much so that it is known as ‘the Serranía Cathedral’, due to its large size and antiquity. Relating to its structure, it has three naves and two big bell towers outside. Besides there is an ancient cemetery in its cellar and the mummified bodies of a couple that helped to finance the temple have remained intact.

We are facing one of the four parish churches the very Catholic Monarchs ordered to build! Located at Málaga historical centre and with a lot of problems to be built. It took two centuries to finish work!

In the town of Pizarra we find one of the oldest hermitages in the Valle del Guadalhorce. Dedicated to the Virgen de la Fuensanta, this chapel has its origin in a 10th century rock temple. This hermitage is guarded for the whole year by hermits, who take care of its preservation and manage followers and tourists visits.

As in Pizarra, the Virgen de la Fuensanta is also venerated in a hermitage in Coín . Don’t be cheated by the modern appearance of the curtain wall, this temple has its origin in the 16th century. Among its peculiarities, the size of the image of the Virgin, that scarcely overcomes 15 cm. of height!

Among  Almogía, Cártama and Álora, we find one of the most symbolic hermitages in the Valle de Guadalhorce, not only for its location but also because one of the most important meetings of Verdiales is held there the first Sunday of May. This temple origin dates back to 18th century.

Located in Ronda, this is one of the most symbolic places for locals. Also known as Cueva de San Antón, this chapel is dug out of the rock and every year the Virgen de la Cabeza is carried there in a crowded pilgrimage. This temple dates back to the 11th century for the Christian worship of Mozarabs, who went on praying in secret!