Cocina en Origen in Marbella. Effortless luxury on the Mediterranean

Marbella is culture, leisure, glamour. One of the most exclusive towns in the Mediterranean, it stretches for 28km along the coastline boasting spectacular beaches, four marinas, fourteen golf courses and wonderful weather all year round. Spending time here is like spending time nowhere else. From shopping in the luxury stores and dining in refined restaurants to having fun in the beach clubs, the opportunities are boundless. And despite its cosmopolitan feel, Marbella is proud of its past and its traditions. No less so than in the local gastronomy. In the series ‘Cocina en Origen’, Samuel Perea goes in search of the origins of Marbella’s cuisine and learns how to prepare longfin tuna fillets a la espalda, in other words, served skin-side down.

During your time in Marbella, you will be enveloped in a beauty like no other, as the sunlight kisses the natural elegance of the dunes and beaches. Sierra Blanca, dominated by La Concha peak, shelters the coastline, creating the most wonderful climate. This is, without doubt, a town of contrasts: from the exquisite details of the historic centre to the luxury and exclusivity of Marbella Club and Puerto Banús. There are very few places in the world that succeed in astonishing jetsetters that have already seen it all. 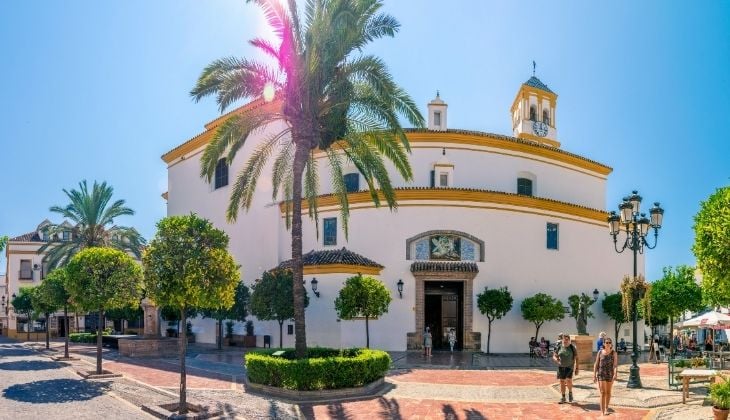 Just fifty years ago, Marbella was a farming and mining community of just 10,000 people. Nowadays, the population stands at over 100,000, and that’s not counting the tourists. The 1960s saw a tourism boom, which displaced the activities that were, until then, the principal source of wealth in the area: farming and fishing. Nevertheless, the past is still more than present in Marbella in the warmth of the people, the culture and, naturally, the gastronomy. Samuel Perea takes a closer look at this in ‘Cocina en Origen’ as chef Santiago Domínguez explains how to make a simple yet flavourful recipe that is bursting with tradition: longfin tuna fillets a la espalda or served skin-side down.

Chef Santiago Domínguez represents the pioneering spirit of hospitality in the Costa del Sol. Santiago wanted to choose a recipe that evokes his origins, the produce in the market, seasonality, his life; he therefore showcases a recipe his mother taught him and that continues to feature on his restaurant menu: longfin tuna fillets a la espalda or served skin-side down.

- The first thing Sanitago does is clean the longfin tuna, remove the fins and gut it.

- When it has reached the right heat, he adds a glug of extra virgin olive oil to the pan and places the tuna fillets skin-side up. He lets the fillets cook for a couple of minutes before setting aside in a dish.

- To make the sauce, Santiago adds a good amount of extra virgin olive oil to the pan, adds a bit of aniseed, taking care that it doesn't burn, and then adds the sliced pickled garlic, frying until golden brown, before adding some sweet vinegar, normal vinegar and a little bit of mustard.

- He removes the sauce from the heat and drizzles over the fillets, serving with roasted peppers and parsley.

In the words of Samuel Perea, “we recognise people, places and colours for what they offer, not for what they have. Marbella embodies the elegance and effortlessness of true luxury”. And this word - “luxury” - reaches new heights in the town. From the sea and mountains to the whitewashed streets and the bustling atmosphere, Marbella offers more than you can possibly imagine.