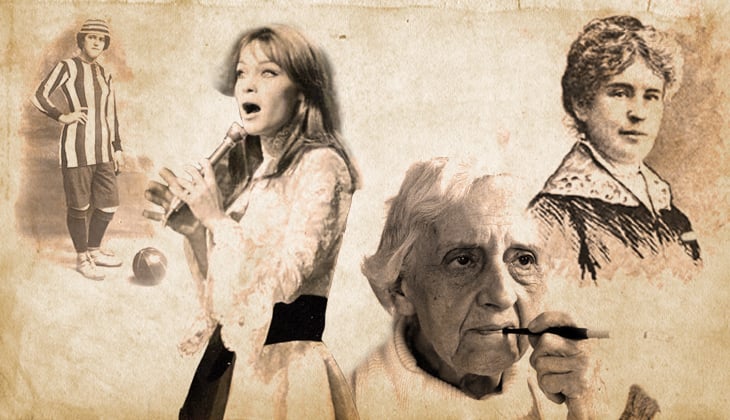 Happy International Women’s Day! In honour of this special time of year, let’s take a look at the lives of some of Malaga’s most influential women. Teresa Aspiazu&Paul, Victoria Kent, María Zambrano, Ana Carmona and Pepa Flores were some of the most illustrious women in Malaga history:

Teresa Aspiazu and Paul: the first female councillor of Málaga

Teresa Aspiazu (Cádiz, 1862 - Málaga, 1949) was the first female councillor in the province of Malaga. Before that, she was a teacher at the Normal de Maestras school and eventually became principal—governing the school for more than 13 years. As if that weren’t enough already, Teresa Aspiazu was also a writer, a lecturer, a columnist and a contributor to several magazines. A tireless feminist, she never stopped fighting for the rights of both women and the disadvantaged. She believed that women should have equal rights in the workplace, and became only the fourth woman in history to get accepted to the Academy of Sciences.

Victoria Kent: the first woman to be admitted to the Madrid Bar Association

Victoria Kent (Málaga, 1891 - New York, 1987) was born into a humble family, and after lots of humanitarian work, she became popular amongst the lower ranks of Malaga society. Growing up, Victoria refused to go to school; opting, instead, for her mother to teach her how to read and write at home. Despite that, she got into the local teaching school and went on to attend law school in Madrid in 1920. (This was unusual for her time, as most women did not move out of their family’s home until they were either married or going to the convent.) In 1925, Victoria became the first woman to be admitted to the Madrid Bar Association. As her career progressed, she became the first woman to practice law before a military court, and in 1931, became one of the first female deputies in the Cortes for the Radical Socialist Party.

María Zambrano: the first woman to win the Cervantes Prize

Not only is María Zambrano (Vélez-Málaga, 1904 - Madrid, 1991) one of the most illustrious women in Malaga history, but she was also a key transcendental thinker and philosopher in Spain. As a student of philosophy, she studied under Ortega y Gasset. After working with Republicans during the Civil War, she was forced into exile and lived all over the world: in Paris, New York, Havana and eventually, Mexico. There, she taught philosophy at the University of San Nicolás de Hidalgo de Morelia, and in 1981, earned the Prince of Asturias Award. María Zambrano was named Doctor Honoris Causa by the University of Malaga, and in 1988, she became the first woman to win the Cervantes Prize.

Ana Carmona (Málaga, 1908 - Málaga, 1940) was the first female soccer player in Spain. She posed as a man and played under the pseudonym ‘La Veleta.’ Fast-forward to 1920, and Ana played for Sporting in Malaga for ten years while still pretending to be a man, as women were not allowed to play football at the time.

Thought to be the most legendary actress in Spanish cinema, Pepa Flores (Málaga, 1948) was an icon in the 1960s. She started in show business when she was only 12 years old, appearing in the movie A Ray of Light (1960), which earned her a children's acting performance award at the Venice Film Festival that same year. As a child, Pepa shot 12 films, including the well-known movie, Tombola. As she got older, Pepa—or “Marisol,” as she was known at the time—wanted to be seen as more desirable. To do that, she played roles in movies like The Corruption of Chris Miller, The Red Mill Girl and The Power of Desire. In 1985, she officially changed her stage name to Pepa Flores and added singing to her list of accomplishments. She recorded 500+ songs in Italian, Portuguese, French, English, German and Japanese during her lifetime before retiring to Malaga in 1986. In 2020, Pepa Flores received the greatest honour in Spanish cinema: she was given the Goya Honor of the Academy of Film. To further honour her accomplishments, the exhibition “Marisol, mi Vida es Mía” will be on display at the Malaga Municipal Archive until April 5.