The Málaga Coastal Path: A walk around the Mediterranean Sea 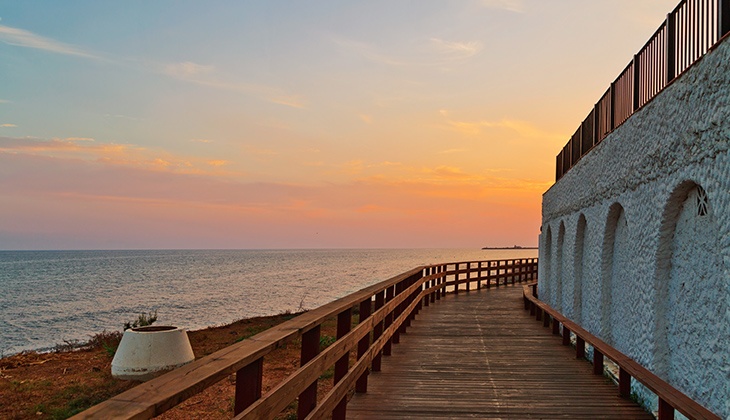 Imagine being able to travel along the Costa del Sol on a sun-drenched path surrounded by the blue of the Mediterranean Sea! This dream comes true thanks to the Málaga Coastal Path, a journey through more than 160 km of coast divided into different stages which run through the 14 coastal villages of the province. A path enjoying one of the best climates of Europe that we can enjoy both on foot and by bicycle thanks to its beautiful paths and wooden walkways as we go through cliffs, rivers and beaches. Walk deep into a unique path!

The Malaga Coastal Path was conceived as a side project of the Great Málaga Path, A circular trip all over the province along paths and trails, that has already become a national reference for the ‘active tourism’. Both sister projects (they have some stages in common) cover the interior and the coast all over the province, from Manilva to Nerja. A majestic work!

A variable difficulty round

The journey through the 14 villages has not the same difficulty all along the road. There is a division into three levels depending on the so-called ‘transit continuity’, in other words, according to the higher or lower facility to connect the different sections.

Thus, the continuity is high where the stages are walkable. This level represents a 73% of the total, resulting in great number of easy access paths. The medium transit continuity refers to the 15% of the total and includes the non-walkable stages, but which we can do with a minimum effort. Finally, the low transit continuity (the remaining 12%) is applied to the non-walkable paths that have a high technical difficulty.

This path gives us the opportunity to see first-hand some areas of inestimable value. It is the case of ‘Cantales de La Araña’, el ‘Peñón del Cuervo’, ‘Punta Chullera’. The ‘Dunas de Artola’, the delta of the ‘Río Vélez’, the mouth of the river ‘Guadalhorce’ or the rocky stage between Calahonda and Calaburras, in Mijas.