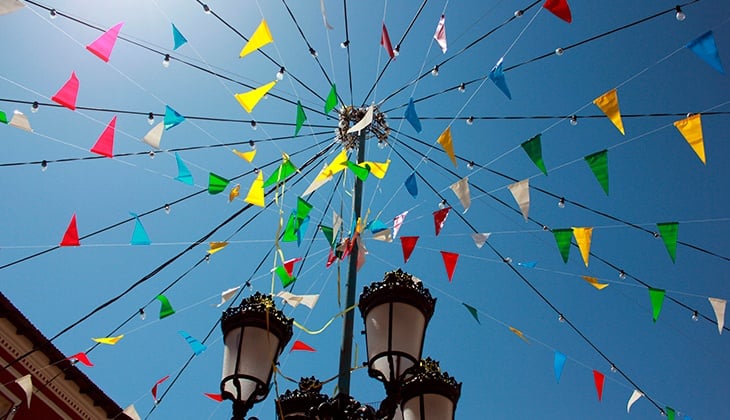 Costa del Sol has many special festivities!  You will find celebrations and festivities along the whole year to enjoy villages' traditions in Málaga province. Most of them are linked to its history and typical gastronomy, so they are an excellent chance to know the Costa del Sol's culture. Take note of it and don't miss any of them!

Many Málaga region villages celebrate typical products and local gastronomy. Ardales celebrates its Fiesta de la Matanza, where everything is just about pork, in January. You could taste all its products! El Burgo celebrates at the end of February the sopa de los siete ramales, a soup prepared with bread and vegetables, and almost all the locals cook this dish!  In April you cannot miss the Día de la Sopa Mondeña in Monda. There you could taste this delightful soup.

One of the Axarquía most famous gastronomical festivities takes place the first May Sunday at Sayalonga. We are talking about the Día del Níspero (Loquat Day), a party dedicated to this fruit and products which are cooked with it. You can try oranges and many other dishes prepared with them in Coín on the Día de la Naranja in May. This is also the escargots’s month in Riogordo, where there is also a festivity dedicated to this dish on the last Sunday of May.

There is a day dedicated to wine in Cómpeta, a village with a large sweet wine tradition. You can taste this served with migas on August the 15th.

We come back to the Axarquía to enjoy ajoblanco. It is free served among locals and  visitors at the end of September in Almáchar. The world best raisins are collected in El Borge, where these fruits have an special day in September. There are other products such as grapes and wine, and you will find other dishes and products like cold meats, gazpacho or migas samples along the year.

The Fiesta de la Castaña is celebrated in Pujerra and Yunquera when rural workers start to collect chestnuts in October and November. So chestnuts and wine, can you ask for something more?

Torrox dedicates a day to one of the Costa del Sol's most traditional dishes in December, migas, a delicacy cooked with semolina that has been served in this Axarquía's village village for more than thirty years.

Would you like to perform how Christians conquered the territory to Arabians? There is the Fiesta de Moros y Cristianos at Alfarnate, Benadalid and Benalauría, where locals remember the Mudejar rebellion which took place at Serranía de Ronda during the 15th Century by a performance in the street.

Do you like dogs? If so, there is a Dog Festival in Archidona at the beginning of June. An extraordinary national event where the man’ best friend is the star, and one of the most important dog festivals in Spain.

Would you like to know traditions from Salares ancient Arabic inhabitants? Costumes and traditions from Arabic people who lived at this region until not more that five centuries ago are replayed with a bazaar, oriental dances and falconry exhibitions among other activities at this festival which takes place in September.

With warm weather festivals season comes to Costa del Sol! Would you like to listen to music at Nerja's Caves? This event, whose present edition is the 58th one, will start on June 10th with the flamenco opera Carmen, from Salvador Távora and with music from the Orquesta Sinfónica de Málaga. What more can you wish for?

One of the Spain's most exclusive festivals will take place in Marbella. Luxury and music go together at the Starlite Festival. This is considered the Europe's largest "boutique festivals", joining the most exclusive artists every year.

If you prefer electronic music, don't miss Los Alamos Beach Festival in Estepona or Weekend Beach in Torre del Mar. Which one do you like best?